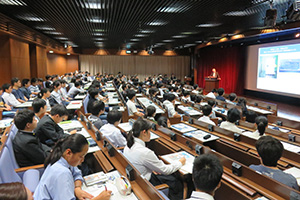 October 29, 2019 – “The Week for Chemistry – your future and tomorrow of chemistry @UTokyo weekend” was held on Saturday, September 26, organized by the Chemical Society of Japan Kanto Branch, the Graduate School of Science and the Faculty of the Engineering of the University of Japan, and co-organized by the Chemistry Olympiad Japan Committee. Some 150 junior high and high school students attended the event at the Koshiba Hall of the University of Tokyo; the participants intently listened to the lectures on the latest topics on chemistry including the development story of nihonium, the newest chemical element.

This event is held as part of the Chemistry Day (the name was derived from the Avogadro constant which represents the number of constituent particles in 1 mole of substance and is expressed as 6.02 x 1023).

After Professor Masaru Ogura, Director of the Kanto Branch of the Chemical Society of Japan and Professor of the Institute of Industrial Science, University of Tokyo, made an opening speech representing the organizers, the lecture sessions were held. 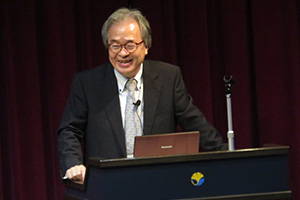 In his keynote speech titled “the Scientists’ Work”, Professor Takehiko Kitamori of Faculty of Engineering, University of Tokyo described the scientists works as contributing to the society in forms of environment, energy, medicine, food supply and peace by “making unknown things known” and “making impossible things possible,” referring to the latest research results including nanofluid devices. He also emphasized that it is also important work to make people understand the significance and value of the research, by writing research papers and making presentations at the conferences. Then he went on to say “Being a scientist is a wonderful and fun job. The college entrance exam is not your goal, it will be your start.” 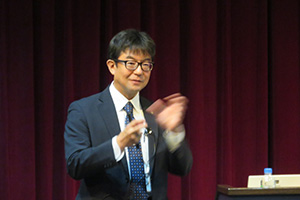 Dr. Hiromitsu Haba, Group Director of the RI Application Research Group at the RIKEN Nishina Center for Accelerator-Based Science, who discovered nihonium (atomic number 113), gave a presentation titled “Let’s look for new elements! “ in which a brief history of atoms and elements and discoveries of new elements were described. In this speech, he reflected a story of searching for the new element nihonium and the joy of development after all the challenges and hardships encountered; he also spoke passionately about the new challenge of discovering a new 119th element out of curium (atomic number 96) and vanadium (23). 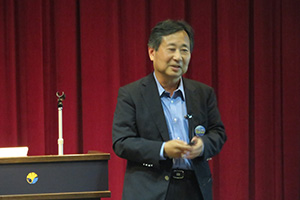 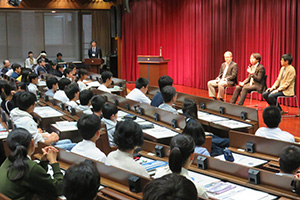 At the talk event, “The Future after That: what it means to work, and what to aim to” three University of Tokyo graduates, Eiji Watanabe (Chief Scientist, Research Planning and Management Department, Research and Development Division, Mitsui Chemicals), Kengo Suzuki (Executive Officer, Euglena), and University of Tokyo Assistant Professor Takashi Hiroi (bronze medalist at the 39th International Chemistry Olympiad in Moscow), took the stage to exchange views on their research topics and goals during their times at the University of Tokyo, career choices after graduation, and current and future goals for their current jobs.

In addition to the lectures, the Public Relations Subcommittee of the International Chemistry Olympiad Japan Committee displayed posters introducing the IChO and explaining the questions at the IChO in Paris, the periodic table of elements, and a panel of Japanese Nobel laureates. The participants were gathering around the posters in between the sessions and having chat about those displays.