Report on “Feeling the Winds of Chemistry in Kyoto”

October 23, 2019 – “Feeling the Winds of Chemistry in Kyoto,” a special event organized by the IChO Japan Organizing Committee was held on Saturday the 19th in the Masukawa Hall (Northern General Education and Research Building of Kyoto University). About 100 students, mainly from junior high and high school students, attended the event and enjoyed an autumn afternoon full of chemistry through lectures on valuable and enjoyable chemistry, and hands-on experiences of analytical instruments. 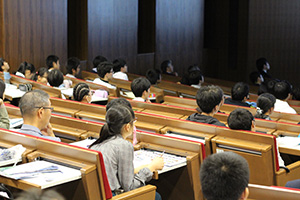 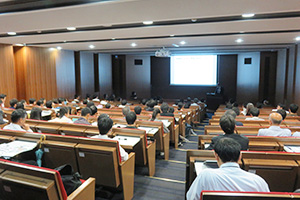 This special event was held on a day of the Chemistry Week that includes the Chemistry Day (October 23), as part of public relations activities for the IChO2021 to be held at Kinki University in Osaka. IChO Japan 2021 Organizing Committee, the Chemical Society of Japan, the Graduate School of Science and the Graduate School of Engineering of Kyoto University, and the Japan Analytical Instrument Manufacturers’ Association collaborated in organizing this event. 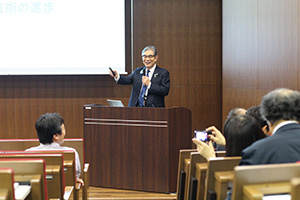 At the lecture, President of IChO 2021 Japan Committee and Chairman of the Organizing Committee and also creator of the “Periodic Table of Element for Every Family” poster Dr. Kohei Tamao (Director of Toyota Physical and Chemical Research Institute, Professor Emeritus of Kyoto University) introduced basics of chemistry in a enjoyable ways including showing how huge Avogadro’s constant (the number of particles in one mole of a substance, expressed as 6.02 x 1023) from which the name “Chemistry Day” was derived, is, by asking some quizzes. He also pointed out that the year 2019 is designated as the International Year of the Periodic Table, and described some of the major elements listed in the table. He then introduced “element word game”, in which the players make Japanese words such as OMoTeNaSi, GaNBaRhO, GaNBaRe NiPPoN, which can be spelled out combining the chemical symbols only which led to the audience’s surprise and laughter. He concluded with saying “let’s enjoy chemistry even more” 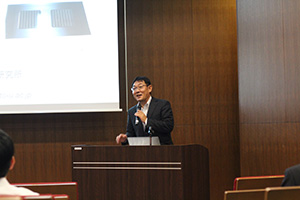 Dr. Atsushi Wakamiya, a researcher of the world’s most advanced high-performance perovskite solar cell (PSC), looked back what motivated a high school student, who wanted to be a professional football player, to become a scientist: “The beginning was that I learned about color and the wavelengths of light in the Newton, a science magazine. Before then, I had been studying just because I didn’t want to lose with my grades, but after I found a dream of becoming a researcher, my motivation to study changed to studying for my future goals, and I started working very hard. Then I chose chemistry in order to contribute to society,” he said. Then he went on to explain in simple terms about the usefulness of organic electronics and about the development of high-performance perovskite solar cells that would be able to be applied as coating. He then concluded “Discovery in chemistry is based on observation and curiosity. I hope that in the future you will become a chemist or scientist and contribute to humanity. 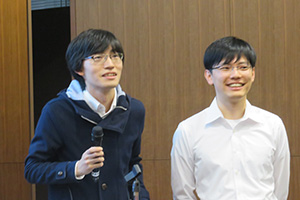 In the talk session, two doctoral students from Kyoto University’s Graduate School of Science, Hayato Saito (IChO 2010 Japan gold medalist and IChO 2011 Turkey silver medalist) and Takuya Yamazumi (IChO 2012 US gold medalist.) talked about how they became members of the IChO team, their experiences at international competitions and their life in the university’s laboratory, and invited the young audience to pursue a career in chemistry, saying, “This could be where you will be in a few years’ time”.

[Experience and demonstration of analytical instruments]

Shimadzu Analytical Chemistry Experience School – What is this made of? (Shimadzu Corporation) 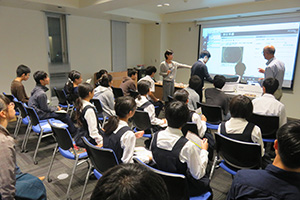 The students experienced analyzing the elemental composition of familiar objects using an energy-dispersive X-ray fluorescence analyzer. The X-ray fluorescence spectrometer and its principle were introduced by the lecturer, and then the participating junior high and high school students first predicted the elemental composition of a koban (Japanese gold oval coins used until 19th Century), a 5 yen coin, and eggshell and then actually measured the compositions. With the exquisite interaction between the lecturer and the host, the students seemed to enjoy learning what elements make up substances. 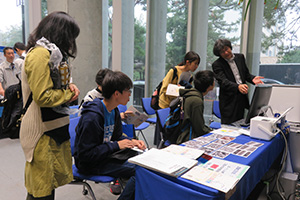 The participants observed samples of plants and animals using a tabletop scanning electron microscopes. They gazed intently at the microscopic world displayed on the screen, which cannot be seen with the naked eye or an optical microscope, and peppered the lecturer with questions.

Everything starts with measuring (Horiba Corporation) 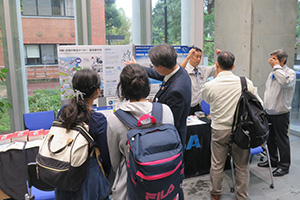 Based on the company’s motto of “Joy and Fun (omoshiro okashiku)”, the company emphasized its challenging work, explaining that all kinds of analytical evaluations and R&D activities from new materials and new energy to automobiles, medicine, and the environment, begin with “measuring” and leads to innovation; they also exhibited small-sized pH meters and portable radiation monitors. 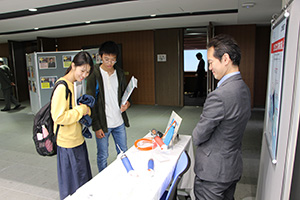 A portable oxygen measuring instrument used for gas detector tubes and detection of the quality of water was exhibited, highlighting the company’s contribution to the safety of society. They also introduced the collection tubes used in analytical chemistry.